The view of QND Qualified Non-Duality is that the Absolute is of the same True Nature as oneself, one Self being of the same True Nature as the Absolute.  There are distinctions such as a difference in vastness, steadiness of experience and such. It is said that it to be as a glass of water and the ocean.  They are both water, the same thing, yet they are not the same one’s understanding can extend to the point of viewing the Absolute as a Background of all, it’s a Substrate of all, as that from which everything arises it to which all will return, & even as to that which pervades everyone & everything with a distinction between the Pervader & the pervaded.

There can be an experience of union, but this will be followed by separation again. There can be a memory of the union while differentiation resumes. The individual experiencer remains, for whom all else arises, who thinks, who feels, who acts, and such.  With such a view of QND Qualified Non-Duality, spiritual practice will become one of attempting merger or union.  The Absolute is viewed more impersonally, as a greater Intelligence, or as some all-pervading Presence. 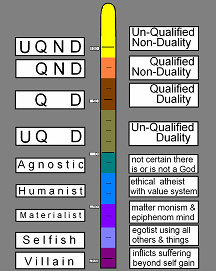 UQND, Un-Qualified Non-Duality, the yellow zone at 90 – 100o   or  90 – 100 %  refers to absolute Non-Duality, as in Advaita Vedanta Ajata Vada, of the purest southern Ch’an Buddhism, purest Vajrayana, Mahayana, Madhyamika, Yogacara, and Taoism, without an actual modification or back-step even if some inevitable appears within the limits of verbal expression. This important ultimate spiritual perspective is rare and often claimed when it cannot strictly be so. The latter cases are no so much evasive claims as much as innocent well meaning slips. Not seeing residual duality in a spiritual viewpoint inversely appears as inability to conceive of a perspective that could be more non-dual, or at least “realistically” non-dual.

The above themes & 2500 pages more are freely available as perused or downloaded PDF’s, the sole occupants of a Public Microsoft Skydrive “Public Folder” accessible through  www.jpstiga.com

Different blogs (but with graphics) are available on:

“There is no Creation, no Destruction, no Bondage, no longing to be freed from Bondage, no striving for Liberation, nor anyone who has attained Liberation. Know that this to be Ultimate Truth.”

for very succinct summary of the teaching & practice, see:  www.ajatavada.com/

[A brief note of explanation – this Blog is entitled “Non-Duality & Science”, & so the more Science oriented pages (from what I like to think of as a “comic book”) have been posted there, while other chapters have been posted in the other Blog noted below. Science is a mental discipline that attracts some worthy admirers & participators.  Some of these, too few, are good prospects for the ancient teaching introduced here in many ways.  Otherwise certain Science topics like the Anthropic Principle, reinforce the general Theism which is a good idea in this materialistic age. A few other topics in Science, such as the Copenhagen II – Max Born – Von Neumann – Wigner model of Quantum Mechanics, are worthy entries to the extent that they introduce Consciousness into the physical Sciences. All that aside, the real topic here is the pinnacle as Advaita Vedanta, Non-Duality – that pinnacle being Ajata Vada, No–Creation. The great Teachers of the same include Sri Shankara & Sri Ramana Maharshi.  Both would support Theism in general & adaptations of Vedanta, such as Vishishtadvaita Vedanta – Qualified Non-Duality, for those not making headway in Ajata Vada, their present course of growth might be better served with a temporary involvement in Qualified Non-Duality. The scientist who perhaps best expresses the influence of Qualified Non-Duality in Science, for instance, would be the quintessential “New–Age” Quantum Physicist, Amit Goswami. And so to that source, & the Quantum Activism he currently advocates [with a 1–course  degree program], along with more than a half-dozen good books & former participation in the controversial What the Bleep movie, to him I extend enthusiastic endorsement, for that Qualified Non-Duality described in the context of Science.  I do not stand so much “with him”, as much as nearby saluting his good work. Again, as here, a goal is inserting Consciousness into Science & “saving the World.”]

also:  Most of this material will be long searchable via “John Stiga” etc, on the “Wayback Machine” Internet Archive.

Also related to these topics, there are now 8 Kindle books on “Amazon.com”, reference-able by the author “John Stiga”, each indicated as non–copyrighted, public–domain, & priced at the minimum $0.99 each.

This site uses Akismet to reduce spam. Learn how your comment data is processed.

From where does the sense of "I" arise?